The ice condenser is a safety system inside the containment building. Most pressurized nuclear reactors do not have an ice condenser containment, they have what is called a volumetric containment. These reactor buildings are much larger, which allows a buildup of steam to have a lot more area to disperse in the event of an accident. The Ice condenser containment system is much smaller and was developed in order to save money on construction costs and have a smaller community profile. 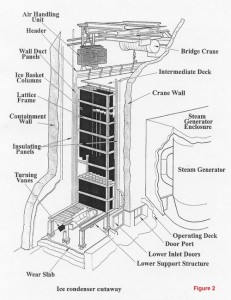 The ice condenser contains 2.5 million pounds of ice and is designed to reduce the pressure in containment in the event of a loss of coolant accident or a main line steam break. The steam would enter at the bottom of the ice bed and the ice would rapidly reduce the pressure. The water would then go into lower containment to cool the core and would get recirculated to a containment spray system.

The ice condenser wraps around 300 degrees of the containment building, separated into 3 sections; the ice bed, upper ice, and lower ice. The ice bed is composed of 1,944 baskets which are 12” in diameter and 48' deep. Between these baskets are flow channels which are the areas where steam would be routed through as it rapidly melts the ice in the event of an accident. The ice condenser is separated into 24 equal bays with 81 baskets in a 9 X 9 grid.

Below the ice bed is lower ice. In lower ice there is enough room to walk around and the ice baskets are set approximately 8 feet above the floor. Each bay has 2 Lower inlet doors where the steam would enter in the event of an accident. The steam goes through structural steel turning vanes which direct the steam upwards to the ice bed. 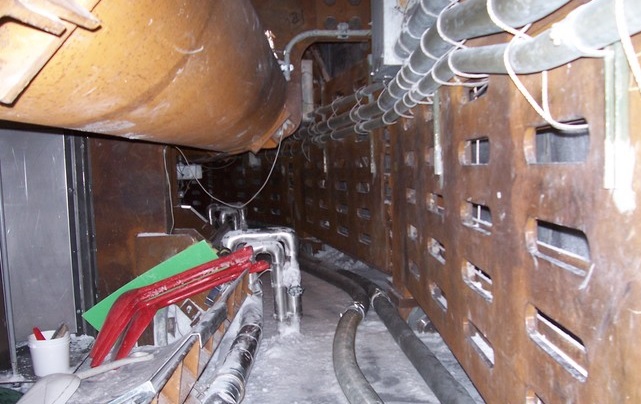 At the top of the ice bed is the intermediate deck doors. These are freezer doors that close on a horizontal plane to keep the cold air inside the ice bed. This is the walking surface in the ice condenser. These doors are on a frame bolted to beams. Each bay has a set of 8 doors on it. These sets can be unbolted and moved to make servicing the ice baskets easier. At the top of upper ice is another series of horizontal doors. In the event of an accident the now cooled down steam would push these doors open and go into the greater upper containment area. 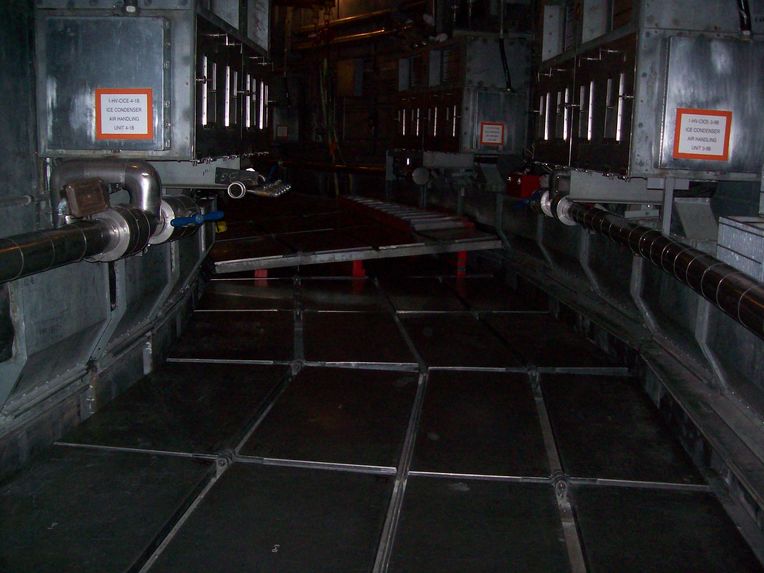 The ice condenser was originally designed to be maintenance free, however ice over time sublimates. Due to differential temperature throughout the ice bed ice migrates throughout the condenser. Over time some baskets gain weight, while others lose weight. For the health of the system it is necessary for the baskets to weigh within a certain range. 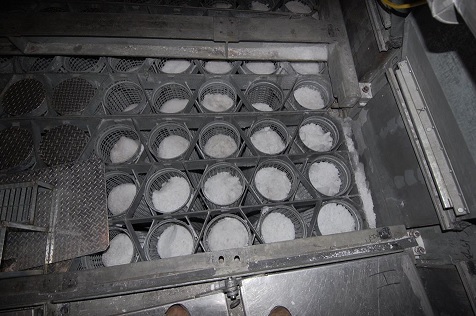 To maintain the ice condenser we weigh all of the baskets and our engineering team determines which baskets need to be serviced. The servicing of baskets includes emptying, inspecting, repairing, and refilling the selected baskets.